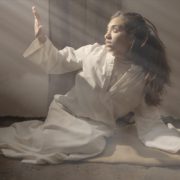 And Mary said, “Behold, I am the servant of the Lord; let it be to me according to your word.” And the angel departed from her. Luke 1:38

We all want to witness miracles.

We want God to wow us with wonder like He did so many times in Scripture. And let’s be honest. We really just wish God would show up and prove Himself.

So we cry out for miracles, just like Habakkuk.

Lord, I have heard of your fame; I stand in awe of your deeds, Lord. Repeat them in our day, in our time make them known; in wrath remember mercy.

Yes, we want the miracles. We just don’t want what God requires of us to release them.

I’m not talking about the theoretical faith we remind one another to carry about like a prized possession. We’ll grab hold of that easily enough.

No, I’m talking about hitting the pavement with it. Living faith that defies difficulty. That stretches and grows us. Faith that believes an unbelievable promise, then holds onto it no matter what.

Do you have that kind of faith, beloved? Do you take God at His Word, no matter how crazy it sounds? Because that’s the only way you and I will ever witness miracles.

We need to trust God’s Word more than we value our comfort.

I wonder if you’ve thought much about Mary’s response to the angel who had just informed her she would give birth to God’s own son. “Let it be to me according to your word.”

Really? Is that how you would’ve responded?

Let’s forget for a moment that we know how it all works out and slip our feet into Mary’s sandals. She was just an ordinary girl, planning a wedding with the man of her dreams.

I wonder how many times she had imagined her wedding day. Would she wear flowers in her hair? Did she help her mother design her dress? I imagine she dreamed of a beautiful gathering with family and friends offering warm smiles and supportive hugs.

Then a messenger appeared with news of a very different dream.

Before her wedding day.

In this new dream, her husband wouldn’t father her firstborn child. She would face ridicule and judgment. She might even lose the husband her dreams encircled.

Yet when an angel of the Lord appeared to her declaring that God had chosen her to mother the Son of God Himself, she said,

“Behold, I am the servant of the Lord; let it be to me according to your word.”

Amazing. Mary simply believed God, and that was enough for her. She was an ordinary woman who set her heart toward extraordinary godly purpose. God’s Word became more important than her comfort and ease. More powerful than doubt, ridicule, shame, or loneliness.

She believed God, and trusted that His plan would bring about His very best for her. God still asks the same of us.

“For I know the plans I have for you,” declares the Lord, “plans to prosper you and not to harm you, plans to give you hope and a future.” Jeremiah 29:11 NIV

Mary’s belief invited God’s seed to create life in her womb. And God would use this ordinary girl as a vessel through whom He would bring about His plan to redeem a lost and broken world.

Do you think she found it worth it, beloved? When she finally looked into the face of the miracle she had carried within her for nine long months, do you think she felt regret?

I don’t. My guess is one emotion consumed her. Love. She gazed into Love’s face and held Him in her arms. I imagine she wept with wonder. And gratitude flooded her heart.

But eventually her miracle would ask more of her. More surrender. More sacrifice.

One day hatred would tear her Son from her. The man He would become would hang before her, bloodied and beaten on a wooden cross.

Her child that kings had worshipped with gifts of gold, frankincense, and myrrh would become the sacrificial Lamb. And Mary would receive her greatest miracle. Eternal life.

Will you trust God to work miracles through your life, beloved? Will you trust even when you don’t understand? Would you believe the blessing overshadows the cost?

And blessed is she who believed that there would be a fulfillment of what was spoken to her from the Lord. Luke 1:45

Sign up to receive our blog, news and updates, ministry opportunities and more! 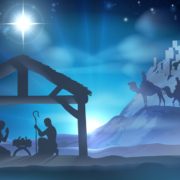 What’s your favorite part of the Christmas story? Is it Mary’s response to a visiting angel? Or perhaps the terrified shepherds tending their flock who found themselves surrounded by the glory of the Lord? I love the image of Magi from the east bowing and presenting costly gifts to a toddler King. If you let them, the details surrounding the birth of Jesus inspire awe and wonder.

I’d like to spend some time with you today treasuring one of those details found in our opening Scripture, “The Word became flesh and made his dwelling among us.” Have you considered the significance of that phrase?

That may seem of little consequence to you. Maybe you’ve lived your whole life expecting God’s silence because that’s all you’ve known. But the overwhelming truth revealed in Scripture is that God speaks to His created. He talked with Adam and Eve in the garden after He gave them life, and our first glimpse of Him after they sinned reveals a striking picture of God’s heart.

Do you see it, dear one? Even after they sinned, God came seeking them. He desires fellowship with us and wants us close. He calls to us, and He waits for us to respond. When we listen, His words provide life and quiet the soul. They become ‘”a lamp to my feet and a light for my path” Psalm 119:105.

It shouldn’t have been a surprise to them. He told them it was coming.

God declared in advance that He would send a famine like no other—a famine of hearing His words. Why would He withhold that treasured gift from His holy people?

The people of God took for granted the gift they had been given. God spoke, but they refused to listen. He desired to fill their mouths, but they decided they didn’t need Him to. They thought they could do it better. So,

Then He poured out His life on a cross so we could maintain that fellowship with God forever. And He left us the gift of His Spirit so we can continue hear and discern the truth of God.

The Word still speaks, dear one. Like Israel centuries ago, you and I must choose whether we will listen.