You are here: Home / Daniel 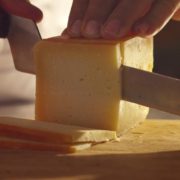 Until recently, that is. A surprise autoimmune diagnosis this summer after several weeks of not feeling well stole dairy from my life in one shocking moment of disbelief in a doctor’s office. I wish I could say that was all. Hopelessness began descending like a heavy weight as the doc ran down the list of things I couldn’t eat while we try to reset my digestive system so my immune system stops attacking me.

Essentially, I’m allowed to eat meat, fruits and vegetables. Oh, and nuts. The doc was kind enough to throw nuts back in the mix, removing them from the off-limits list after a glance at me. Apparently, he has a soft spot for women on the verge of tears.

I think perhaps we all go through times when life seems to throw one curveball after another. This has been one of those seasons. And dealing with loss, two cancer diagnoses, ministry challenges, and hurting children seems a little easier with comfort food.

I’ll admit I gave in momentarily to that inner dialog that occurs when something doesn’t seem fair. I already eat far better than my immediate family members. I exercise regularly. Logic says this shouldn’t be happening to someone who tries to take good care of her temple.

But suddenly I find myself in a place where God is requiring more. And when I first heard the news, I wasn’t sure I wanted to give it.

Who wants to give up cookies, brownies and ice cream? Or even mashed potatoes, for crying out loud? And let’s not forget the cheese.

But even before I met with God in prayer to begin to sort all this out, I knew. He was in this. This filtered into my life from His own hand. You see, I’ve been asking Him for something for several years. Something I prayed with bold faith and expectation. This broken vessel has been crying out to God to manifest the work of the cross in my life. I have repeatedly asked Him to empower me live the promise of Galatians 2:20.

I have been crucified with Christ. It is no longer I who live, but Christ who lives in me. And the life I now live in the flesh I live by faith in the Son of God, who loved me and gave himself for me.

The crucifixion of our flesh is something we like in theory but rarely care for practically. It’s one of those themes in scripture we often skirt around. We may have the guts to crucify things we view as big, obvious sin. But what about those things that don’t appear to us as sin at all? What about things that may even appear good to us but somehow hinder the race He’s called us to run (Hebrews 12:1)?

I have repeatedly asked Jesus to put to death every bit of my flesh that resists Him. I want His Spirit to reign over every part of me. And I believed my words as I proclaimed these desires to the Savior who loved me and gave Himself for me.

Until He began to show me how much I really resisted Him. Apparently, I didn’t mean the part that loves cheese and baked goods.

We humans tend to compartmentalize. We’ll readily give Jesus access to some places. But others we reserve for ourselves. We’ll give Him our service, but we guard our cravings. Some part of us believes we have a right to them. And we wrap it all up with the notion that our God of blessing wants us to be happy.

And He does. He just wants to be the source of that happiness. He wants us living bound to the notion of Psalm 16:11.

You make known to me the path of life; in your presence there is fullness of joy; at your right hand are pleasures forevermore.

God doesn’t want us seeking to find joy in His blessings. He wants us knowing He is the blessing.

God doesn’t want us seeking to find joy in His blessings. He wants us knowing He is the blessing. Click To Tweet

Sometimes surrender is easy. Sometimes we go kicking and screaming. But the question remains. Will we go?

Will we ask Him to take us to His very best for us and be willing to follow where He leads? Will we go even if no one else goes with us?

Even though my flesh at times resists Him, I’m thankful for a God who answers prayer. And even though the road is often hard and bumpy, He’s worth the trip.

The death of my flesh isn’t the only thing I’ve been asking God for. I’ve also been praying for wisdom and understanding of His Word that will break open the darkness binding much of the church and release His bride to shine brightly in the beauty of the cross.

Look at what link He just showed me again in scripture.

But Daniel resolved that he would not defile himself with the king’s food, or with the wine that he drank. Therefore he asked the chief of the eunuchs to allow him not to defile himself.… And in every matter of wisdom and understanding about which the king inquired of them, he found them ten times better than all the magicians and enchanters that were in all his kingdom. Daniel 1:8, 20

God honored Daniel’s fast with wisdom and understanding that astounded the world. Only He knows how He’ll honor mine.

I’m not arguing with God anymore. Hopeful expectation has overshadowed that feeling of hopelessness. The King of Kings stands ready to move in my life as I willingly submit and trust Him with my future.

Oh, beloved. What are you willing to seek God for?

God answers prayer. I love the certainty of that promise.

But our opening scripture also reveals another truth: We often have to wait for that answer.

The waiting frustrates most of us. In this world of instant gratification, often God’s movement seems a bit slow. But what if it isn’t God that’s keeping you from your answer?

Today we will glimpse two prayers from a gatekeeper, a man whose prayers released God’s deliverance on this earth. You’ve probably heard of him. His name is Daniel.

Our friend Daniel is most famous for having survived a den of lions, but that’s not what we’ll be talking about today. Today we’ll see how he served the people of God as a watchman, discerning God’s Word and releasing His will through prayer.

In the first year of his reign, I, Daniel, perceived in the books the number of years that, according to the word of the Lord to Jeremiah the prophet, must pass before the end of the desolations of Jerusalem, namely, seventy years. Daniel 9:2

Daniel lived in Babylon, the result of Israel being carried off into captivity because sin had removed God’s covering of protection. Jeremiah had warned them in advance of their exile, declaring they would serve the king of Babylon for 70 years.

Daniel realized those 70 years were coming to a close and it was time for God to deliver His people once more. So, he put on his party hat and waited to see God move.

Well, not exactly. He did precisely what Elijah did last week when God had revealed His will. He prayed.

Then I turned my face to the Lord God, seeking him by prayer and pleas for mercy … I prayed to the Lord my God… Daniel 9:3-4

Interesting consistency, don’t you think? God declares His will, and a human vessel comes into agreement with Him through prayer to see that what God said would happen actually does.

Are you beginning to understand the vital importance of prayer, dear one? You and I won’t see God manifest His power without it.

Daniel understood that and dropped to his knees. I love what scripture reveals about his answer.

While I was speaking and praying, confessing my sin and the sin of my people Israel, and presenting my plea before the Lord my God for the holy hill of my God, while I was speaking in prayer, the man Gabriel, whom I had seen in the vision at the first, came to me in swift flight at the time of the evening sacrifice. Daniel 9:20-21

Can you even imagine it? Daniel hadn’t even finished praying, and an angel showed up mid-sentence to give him God’s answer.

I bet you’re wishing you were on Gabriel’s “to do” list today.

Look at what Gabriel tells him.

At the beginning of your pleas for mercy a word went out, and I have come to tell it to you, for you are greatly loved. Daniel 9:23

The NIV puts it this way. As soon as you began to pray, a word went out, which I have come to tell you.

Here’s what you need to know, dear one. Every time you utter a prayer with a heart that seeks God’s will, He moves. Something happens in the heavenly realms whether you see it at that moment or not.

This particular time, when Daniel prayed, God blessed him with an immediate answer. But let’s see what happens a few years later when Daniel approaches God the same way.

In Daniel 10, under the reign of a new king, Daniel received a vision from God and began to seek Him in prayer and fasting for understanding of it. We’re told he fasted, prayed and didn’t bathe for three straight weeks before a visitor arrived with a word from God.

“Do not be afraid, Daniel. Since the first day that you set your mind to gain understanding and to humble yourself before your God, your words were heard, and I have come in response to them. Daniel 10:12

Once again, we see God confirming that He heard and answered Daniel’s prayer on the first day he started asking. But let’s see what else the visitor tells him.

But the prince of the Persian kingdom resisted me twenty-one days. Then Michael, one of the chief princes, came to help me, because I was detained there with the king of Persia. Now I have come to explain to you what will happen to your people in the future, for the vision concerns a time yet to come.” Daniel 10:13-14

What in the world? God dispatched a messenger immediately to deliver His answer, but the prince of the Persian kingdom detained him for three straight weeks until the archangel Michael came to help him so he could slip away.

Listen, dear one. You and I have no idea what’s happening even now in the heavenly realms. Satan’s forces work hard to hinder God’s movement on earth at every turn. What we just read describes angels and demons battling in the unseen.

God sent His answer, but evil forces sought to hinder it from getting through to the earth. Why? Because presently the earth is Satan’s realm, and the enemy comes against God’s own “in great wrath, because he knows that his time is short!” (Revelation 12:12)

But here’s our amazing promise!

You are from God and have overcome them, for he who is in you is greater than he who is in the world. 1 John 4:4

God’s will always trumps the enemy’s efforts, as long as there is a human vessel willing to bend the knee and align himself with God to see it accomplished on earth.

Daniel prayed for 3 straight weeks. The angel met resistance for precisely 21 days. Daniels’s persistence in prayer bound the work of the enemy and loosed God’s will so it could become realized in his life.

Does that sound familiar, dear one? Jesus taught that the gates of hell cannot prevail against a praying church.