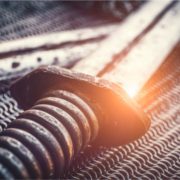 “No weapon that is fashioned against you shall succeed, and you shall refute every tongue that rises against you in judgment. This is the heritage of the servants of the Lord and their vindication from me, declares the Lord.” Isaiah 45:17

I think sometimes we forget that God permits the enemy to form his weapons.

He promises victory over our enemy. He doesn’t promise the enemy won’t attack. In fact, he will attack—perpetually—strategically forming weapons to pinpoint our weaknesses and destroy us.

Covid-19 is one of his weapons. Fear is another. Opposition. We’re facing an onslaught of enemy weapons right now.

Yet, we as believers carry a glorious promise. Even when the enemy fashions a weapon against us, our union with Christ won’t allow it to succeed. You and I need to learn how to step into the graces of that truth.

Jesus’ life shows us how.

His story isn’t a string of joyous, wonderful events unfolding to lead Him into ministry. Instead, we see weapons forming against Him at every turn to literally snuff out His life.

The first two chapters of Matthew recount Jesus’ birth and early childhood. This morning, God opened that story to me and gave me a fresh perspective. I was struck by the phrase, “This was to fulfill what the Lord had spoken by the prophet…” (Matthew 2:15) recurring throughout the text.

And I realized something.

God saw the weapons the enemy would form against His Son and spoke in advance what would need to happen to avoid them. His prophetic word revealed the way of rescue, the path that would lead Jesus to safety.

…For the testimony of Jesus is the spirit of prophecy. Revelation 19:10

We find salvation in the Word of the Lord, beloved. Not merely the written text of the law, but the present Rhema word that God is speaking to align us with the plans He has established for us—our own pathway to defeat the weapons formed against us by our enemy. Jeremiah 29:11 promises that He has already foreseen and established His plan to prosper us. Now, His Spirit wants to lead us on that path into salvation.

When King Herod learned of Jesus’ existence from the wise men who came to worship Him, the enemy fashioned him into a weapon to destroy Jesus, manipulating him through fear and jealousy. God foresaw that this would happen and spoke His deliverance through the prophets in advance.

Now when they had departed, behold, an angel of the Lord appeared to Joseph in a dream and said, “Rise, take the child and his mother, and flee to Egypt, and remain there until I tell you, for Herod is about to search for the child, to destroy him.” 14 And he rose and took the child and his mother by night and departed to Egypt 15 and remained there until the death of Herod. This was to fulfill what the Lord had spoken by the prophet, “Out of Egypt I called my son.” Matthew 2:13-15

God foretold in advance that Jesus would have to go to Egypt. It wasn’t until the time came to fulfill that prophecy that we learned why. The enemy set Herod’s heart against Jesus to destroy Him, and God established the means to thwart his plans so they wouldn’t succeed. But in order to evade that weapon, those living in the appointed time for that the prophecy had to discern and trust the present Word of the Lord to make it safely through.

The angel of the Lord spoke to Joseph to send his family to Egypt. If Joseph hadn’t trusted God’s instructions, the enemy’s weapon would have prospered.

We see it again when Herod’s death prompted Joseph to return to Israel with his family. Once again, the angel of the Lord commanded his timing, “Rise, take the child and his mother and go to the land of Israel, for those who sought the child’s life are dead” (verse 20).

…and being warned in a dream he withdrew to the district of Galilee. 23 And he went and lived in a city called Nazareth, so that what was spoken by the prophets might be fulfilled, that he would be called a Nazarene.Verses 22-23

Do you see it, dear one? The plan to prosper Jesus’ life, spoken over Him by His Father from the very beginning, included the means to evade the enemy’s plans to destroy Him.

Only intimacy with God will render the enemy’s weapons useless.

We need to hear from heaven and align our hearts to trust what we hear. Then we express that trust through our obedience.

Trust in the Lord with all your heart, and do not lean on your own understanding. 6 In all your ways acknowledge him, and he will make straight your paths.

Weapons have been formed, dear one. So has the strategy to defeat them. Your safety is found in God’s hands and heart. Draw near. Discern what He’s speaking. And align yourself with what you hear.

Many are the afflictions of the righteous, but the Lord delivers him out of them all. Psalm 34:19