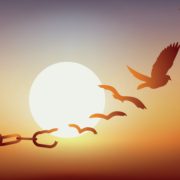 I wonder if you’ve noticed that the harder you try not to do something, the more you want to.

Anyone who’s ever tried to diet knows what I’m talking about. The more we tell our flesh it can’t have something, the stronger its insistence that we need it.

That’s the nature of sin, dear one.

It sees a boundary and wants to break it. It will push us toward what we want to avoid with increasing strength until finally—exhausted from the battle against our own will—we give in to its call. And our efforts to avoid and delay it only serve to add to our satisfaction when we do.

So many of us have wearied ourselves trying to follow the law of God, but we never discover the capacity to fulfill it. Instead of the victory Scripture promises, we find ourselves caught in a repetitive cycle of stumbling and shame.

I’m about to tell you something that may shock you. It will, however, give you some insight into your frustration. Take another look at the truth found in our opening Scripture.

…the power of sin is the law.

Beloved, if you thought the law could keep you from sin, you’re sadly mistaken. Sin actually draws its power from the law. The more we focus on trying to avoid the sin, the stronger it becomes.

Paul explains it further in Romans 7:7-8.

What then shall we say? That the law is sin? By no means! Yet if it had not been for the law, I would not have known sin. For I would not have known what it is to covet if the law had not said, “You shall not covet.” 8 But sin, seizing an opportunity through the commandment, produced in me all kinds of covetousness. For apart from the law, sin lies dead.

Verse 5 sums it up nicely.

For while we were living in the flesh, our sinful passions, aroused by the law, were at work in our members to bear fruit for death.

Do you see it, dear one? According to Scripture, the law on its own has no power to keep us from sin. On the contrary, it actually arouses and provokes our sin nature to disobedience. As the Word of God calls us into righteousness, our flesh awakens to tighten its grip.

8 But sin, seizing an opportunity through the commandment, produced in me…

Sin already lives within humanity, searching for an expression. God’s commands merely afford it a means to rebel and wound His heart. That’s why we can never be justified by following the law.

For by works of the law no human being will be justified in his sight, since through the law comes knowledge of sin. Romans 3:20

God gave the law to expose sin and equip us to make judgments between good and evil, but it holds no power to overcome it. And those who try to follow the law by human effort will surely break it. The more they strive, the greater sin’s power within them will grow.

If we want to live in the victorious promises of God’s Word, we need to recognize this truth.

Religion doesn’t save us, dear one. It enslaves. It convinces us to strive after something we can’t attain, and it wearies us under the weight of it. No wonder our enemy loves to shackle believers with religious bondage. Under a strict rule of law that denies love and quenches the Spirit, sin grows in secret. Focusing on the law will only increase its power. The law, without love to fulfill it, actually perpetuates sin.

For since the law has but a shadow of the good things to come instead of the true form of these realities, it can never, by the same sacrifices that are continually offered every year, make perfect those who draw near. Hebrews 10:1

Jesus fulfilled the law by pouring out what it lacked. He came as the true form of what the law pointed to, an expression of love, revealing the Father’s heart for us. He entered earth’s atmosphere as the Truth that sets men free.

Because Truth carries more than rules and regulations. It also manifests God’s character. Truth finds love as its source, changing us from the inside out and accessing the grace to live differently. Jesus conquered the power of the law with love, enabling us to fulfill it.

You don’t need more will-power, dear one. You need love. You need the Spirit of God manifesting within you to release who He is. Love. Joy. Peace. Patience. Kindness. Goodness. Gentleness. Faithfulness. Self-control.

Your victory will come as love increases. Law becomes Truth as we receive God’s heart with it.

Living in Denial
Scroll to top