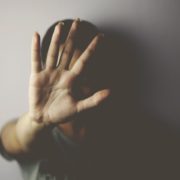 Then Jesus told his disciples, “If anyone would come after me, let him deny himself and take up his cross and follow me. 25For whoever would save his life will lose it, but whoever loses his life for my sake will find it.” Matthew 16:24-25

Self-denial isn’t something we really like to talk about. Our enemy has convinced us to fear it, so we naturally resist it. But he has a reason for influencing us toward self-preservation. If we do not diligently—purposefully—resolve to deny our flesh, we will end up denying Christ.

We won’t intend to, but we will.

He never imagined himself capable of it. He was Peter—the first to confess Jesus as the promised Christ. One of the first to abandon everything to follow Him. The only disciple to walk on water. He would follow Jesus to His death. At least, he thought he would. But Jesus knew better.

On the night of His arrest, Jesus warned His disciples what was about to take place.

“You will all fall away because of me this night. For it is written, ‘I will strike the shepherd, and the sheep of the flock will be scattered.’” Matthew 26:31

Peter’s self-confidence got the better of him.

Peter answered him, “Though they all fall away because of you, I will never fall away.” 34Jesus said to him, “Truly, I tell you, this very night, before the rooster crows, you will deny me three times.” 35 Peter said to him, “Even if I must die with you, I will not deny you!” And all the disciples said the same. Matthew 26:33-35

Peter had placed his confidence in the wrong source. He didn’t yet understand the flesh’s dominion over humanity. He still believed he could conquer it. In his heart, he knew he was stronger than his flesh and trusted he could will himself to accomplish what he wanted. Even if the rest of them failed, he would not. He felt secure in his self-sufficiency.

Until later that night when he heard the rooster crow.

And Peter remembered the saying of Jesus, “Before the rooster crows, you will deny me three times.” And he went out and wept bitterly. (Verse 75)

Face to face with his own inadequacy, Peter wept, humbled by the fresh revelation of what Jesus had already tried to teach them in Matthew 19:26.

“With man this is impossible.”

Beloved, confidence in your own ability will always come up short. When Peter walked in self-confidence and self-sufficiency, he failed miserably.

You and I aren’t capable of conquering our own flesh, dear one. Peter thought he could. He sincerely believed that no temptation could pull him away from his Lord. After all, He was Peter. The Rock. He had healed the sick and cast out demons. He was part of Christ’s inner circle. He’d walked on water, for crying out loud. Nothing could keep Him from following Jesus.

Nothing, except his own flesh.

Self-sufficiency shifted to self-preservation that made him deny his teacher and friend.

No wonder Jesus told His disciples,

“If anyone would come after me, let him deny himself and take up his cross and follow me. For whoever would save his life will lose it, but whoever loses his life for my sake will find it.” Matthew 16:24-25

Dear one, if you and I don’t deny ourselves, we will end up denying Jesus.

We won’t mean to, but self isn’t capable of following Him with any sustained success. Self-righteousness, self-confidence, and self-will won’t cut it. “With man this is impossible.”

Yet, when Jesus shined a light on Peter’s inadequacy, crushing the illusion that he was capable of fulfilling his calling by his own will and strength, He presented Peter with an opportunity. He could repent of his self-confidence and step into divine power. Peter finally understood the reality of the first portion of Matthew 19:26,“With man this is impossible.” Now he could discover the power of the rest.

“…but with God all things are possible.”

Beloved, you and I must embrace our own inadequacy if we are to discover God’s mighty power. Self-sufficiency only keeps us bound to the world’s limitations. If we will learn to deny ourselves, we can take up the power of the cross. All that it poured out becomes available to us. Forgiveness. Grace. Strength. Love. Restoration.

Perhaps denial isn’t such a bad thing after all.

Self-denial lets go of your limitations, allowing the cross to propel you into Christ’s abundance.

Breaking the Power of the Law

The Narrow Way to Victory
Scroll to top