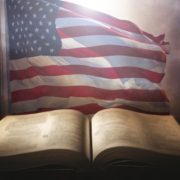 This is the spirit of the antichrist, which you have heard is coming and even now is already in the world. 1 John 4:3b

I wonder if you can sense the magnitude of what’s happening in our days. This turmoil isn’t just about our nation. The atmosphere itself expresses the increasing spiritual tension building in the heavenlies. Good versus evil. Life opposing death. Love rising to conquer fear.

We are at war.

But many of us have been confused about who we are fighting. This war isn’t Republican versus Democrat. It isn’t black against white. We battle an unseen enemy, a devil who manipulates hearts. Jesus described him in John 8:44.

You belong to your father, the devil, and you want to carry out your father’s desires. He was a murderer from the beginning, not holding to the truth, for there is no truth in him. When he lies, he speaks his native language, for he is a liar and the father of lies.

All deception has a source, beloved. You just read about him. Our enemy sowed deception in the hearts of mankind to oppose the very nature of God and keep Him hidden on the earth He created to reveal Himself! Our Creator is Truth and Light, unity and love. Satan operates through deception and darkness, division and fear. What we have experienced as a nation proves his increasing presence in our midst as he divides even brothers and friends on opposing sides.

We can’t allow him to continue.

But we need to understand something about deception, dear one. It deceives. We’re completely unaware of the manipulation. Deceptions make sense to us. They appear right in our mind and hearts, and we feel compelled to follow them.

Hear me, dear one. The greatest danger in our day is not blatant evil. It is evil gaining ground under the guise of apparent good.

And no wonder, for Satan himself masquerades as an angel of light. 15 It is not surprising, then, if his servants also masquerade as servants of righteousness. Their end will be what their actions deserve. 2 Corinthians 11:14-15

I think if we’re honest, we’re hard pressed to know what’s really true in our day. We’ve been conditioned to a particular response, and so whatever we see only serves to reinforce what we already know is true. Here’s a radical thought: What if each of us stopped to consider that we might actually have it wrong?

Isaiah made a declaration that I believe marks our generation.

So justice is driven back, and righteousness stands at a distance; truth has stumbled in the streets, honesty cannot enter. 15 Truth is nowhere to be found, and whoever shuns evil becomes a prey. The Lord looked and was displeased that there was no justice. Isaiah 59:14-15

How can brothers and sisters committed to loving and following Jesus oppose one another so vehemently? Deception is how. The deceiver has entered our midst and set up his throne in the sanctuary of God, manipulating hearts and minds. He has taken the seat we committed to Christ when we professed our faith to follow Him. And we have permitted it, completely unaware that he’s using the very wounds he inflicted on us to manipulate us away from Christ.

What if we pushed pause and asked the Lord to reveal what is true? What does His heart long to communicate to His Bride in this season? What agendas have we allowed the enemy to advance under the guise of right?

Beloved, Jesus is our Way. He is the only Truth. He is our life.

He brings hidden things into the light—not to condemn us, but to save us. To save us from the deceiver who darkens our minds with ignorance and misunderstanding, all the while convincing us that we’re walking in light and truth. To save us from our own pride in assuming we’re right.

We wouldn’t be the first to fiercely oppose the work of God in our day, fully convinced that we stood on the right side. Paul himself—who God later used to write most of the New Testament—began his journey on the wrong side.

And that is just what I did in Jerusalem. On the authority of the chief priests I put many of the Lord’s people in prison, and when they were put to death, I cast my vote against them. 11 Many a time I went from one synagogue to another to have them punished, and I tried to force them to blaspheme. I was so obsessed with persecuting them that I even hunted them down in foreign cities. Acts 26:10-11

Paul’s manipulated heart led him to hunt down and destroy the followers of Christ, and he did it in zealous affection for God. He believed he was fighting for the God he actually opposed. The deceiver had completely convinced him that something false was true. Until Truth Himself appeared to him on the road to Damascus.

Paul had a choice in that moment. He could’ve insisted he was right like the other religious leaders in his day and continued pushing his agenda. But he didn’t. He humbled himself to acknowledge his error and spent the rest of his life aligning with the Truth he had found.

Oh, brothers and sisters, this is our Damascus moment. Will we invite Truth to reveal Himself in this hour? Would you join me in humbling your heart to consider that we may not be as right as we think we are?

I heard a beautiful woman of God say recently,

She’s right. Humility marks every true image bearer, and it begins—not with the assumption that I’m right—but with the humble awareness that without divine intervention, my deceitful heart gets it wrong. Let’s not be the prideful Pharisees that pronounce judgment based on our own understanding. Let’s hear from heaven and discern the spirits with humble hearts, prepared to turn in whatever direction the King of Glory sends us.

This is a divine hour. The Lord of Hosts summons the true worshippers to rise. Spirit and Truth will combine to reveal His glory in our midst.

Let’s not be caught stumbling in the darkness.

Grateful for Fellowship
Scroll to top